Many factors can be involved in commercial trucking collisions, but the Federal Motor Carrier Safety Administration (FMCSA) found the following ten factors as the most common contributors to these crashes:

Not only do truck drivers need to be vigilant to avoid collisions, but minor errors caused by drivers of passenger vehicles also often cause traffic accidents with large trucks. Here are a few of the most common unsafe acts committed by drivers of passenger vehicles that result in accidents with large trucks:

The shift of cargo within the truck is usually considered negligence. This is because truck drivers learn proper cargo loading in training. When a truck driver disregards cargo regulations, other drivers, passengers, and pedestrians are at risk. Cargo shifts within the vehicle often startle the driver, causing them to swerve. However, cargo shifts outside of the vehicle are even more worrisome. If objects fall off a truck and result in a collision, reporting the incident to law enforcement is important. If injured in one of these situations while driving your vehicle, we highly recommend you call an experienced trucking accident lawyer.

Truck driving involves several elements, such as training, experience, vehicle design, travel conditions, and traffic signaling. This does not take into account some of the things that can go wrong, such as tire blowouts and brake failure. As mentioned previously, FMCSA crash experts rarely conclude that crashes are the result of a single factor. Because of this, it’s important that every driver – truck driver or personal vehicle driver – be aware of your surroundings and the factors within your control, such as wearing a seatbelt and slowing down when necessary.

2015 featured a 5% increase in trucking fatalities, which grew to a 6% increase in 2016. Thankfully, FMCSA statistics at least gives hope to Kansas and Missouri. Ten stages accounted for over half of fatal crashes involving large trucks and buses; none of which were Kansas or Missouri. The ten states were California, Texas, Illinois, Indiana, Ohio, Pennsylvania, New York, Florida, Georgia, and North Carolina.

Kansas Department of Transportation statistics show the total number of large truck accidents was down significantly in 2017 from ten years ago. 2007 had a reported 3,872 total crashes, while 2017 only had 3,103 crashes. Unfortunately, the number of fatalities rose slightly from 2016 to 2017, but injuries and property damage only (PDO) fell. Check out the full table below. 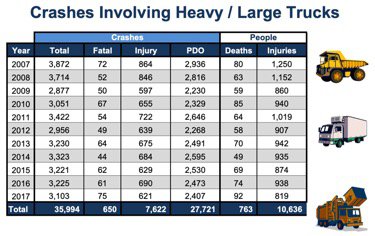 As you can see, some trucking accident statistics are on the rise. FMCSA efforts continue to be made to make trucking regulations safer for both truck drivers and drivers of other vehicles on the road. For example, regulations on driving hours are updated frequently to ensure truck drivers receive adequate rest before hitting the road again.

FMCSA officials recently shared a prototype truck displaying a new multiview camera system that would replace the large side mirrors on semi-trucks. Two large trucking companies, Freightliner and Peterbilt, are currently testing the new camera system alongside the conventional mirror trucks. The new camera system would provide better surveillance around the vehicle to warn of potential collisions. Removing the large bulky mirrors would also make the trucks more aerodynamic, reducing fuel consumption by 2 to 3 percent.

If you are the victim of a motor vehicle crash involving a truck, the attorneys at Biesterveld & Crook, LLC are here to help. Whether you are a truck driver or were injured due to a truck driver’s negligence, we offer free consultations for all injured parties. Call or click here to set up your free initial meeting today. We are ready to fight for the compensation you deserve!

Check out part two of our series to get answers to the most common FAQ’s about commercial trucking accidents.